It is thanks to some great artists, dance masters and gurus that they have given to this Dance-art a definite structure as well as directness and symmetry in its aligment.

Its steps are connected to the earth yet elegant and gracious at the same time.

Although classical indian dance is nowadays mainly performed outside the temple, its essence of Bhakti , devotion, has remained.

Bharata Natyam is the classical dance style of Tamil Nadu, and until the 20th century it was an important part of temple rituals. During the British occupation its religious significance and hence the renown of the Devadasis (temple dancers) declined greatly. It is thanks to a few scholars and artists of merit like Meenakshi Sundaram Pillay that the impeding loss of this marvellous dance form was averted in the thirties. Rukmini Devi Arundalel, founder of the Kalakshetra School in Madras, significantly contributed, amongst others, to the revival of the true Bharatanatyam.

The oldest text about classical Indian dance is the Natya Shastra, written down by the sage Bharata while in deep meditation. Also known as the fifth Veda, the Natya Shastra, developed out of the four first Vedas, the oldest writings of India, to this day the foundation of the interrelated arts of dance, drama and music. Although all classical Indian dances are based upon the Natya Shastra and tell stories from the Mahabharata, the Ramayana and the Puranas, different styles of dancing have developed in the various regions. Of sacred origin, they all illustrate first and foremost the relationship between god and man expressed by the dancer through abhinaya (mime), mudras (hand gestures) and body movements. Basic to Indian dance and music are raga (melody), tala (rhythm) and bhava (sentiment) – the mood created by the dancer – eliciting distinct feelings in the audience, called rasas.

As a great yogi and cosmic dancer, Shiva Nataraja, in his Tandava dance, represents the perfect equilibrium of creation, conservation, destruction, disguise and redemption (moksha). 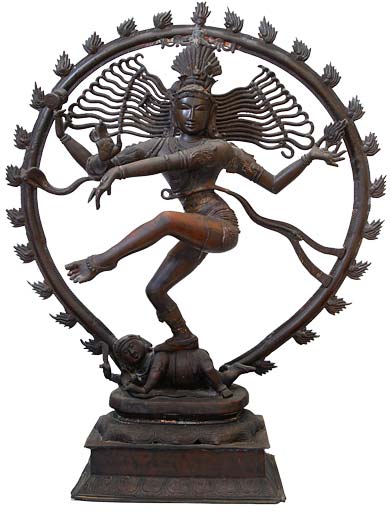 Shiva helps us to overcome polar opposites and to attain inner freedom on our spiritual path by way of dance and yoga.